“I never knew my love for the game could have taken me to Toronto,” Kaiswatum said.

He threw not only for himself but for Standing Buffalo Dakota Nation, which sits in the heart of the Qu’Appelle Valley, surrounded by two serene lakes with a baseball diamond in the centre.

As a natural leader, helper and multi-position player, his passion for the game is why he was chosen for the symbolic throw.

“We’re looking for passion, for dedication, for hard work,” said Tara Griffith, FHQ Rookie Baseball League co-ordinator. “Taron is a kid who never misses a game or practice. His energy, his effort, his positive attitude towards his coaches and teammates — he truly inspires his whole nation here.”

“He just has a passion for baseball; he’d probably sleep in his ball equipment if he had the chance,” said his grandfather, Darwin Keshane.

“He’s always helpful and he’s all over the field and helps his teammates.” 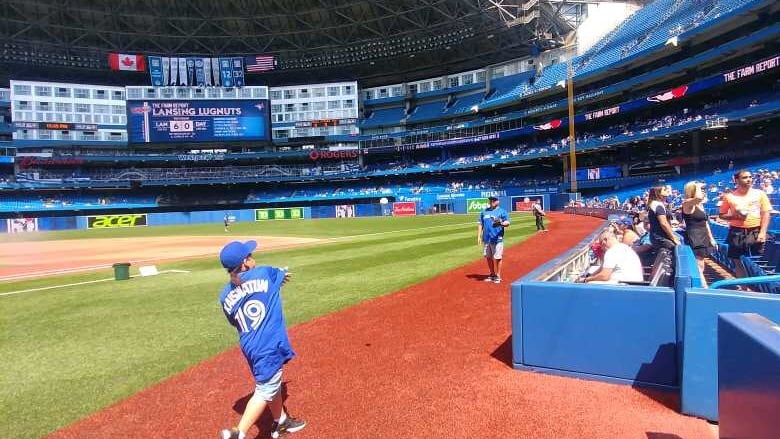 Kaiswatum is being raised by his single dad, and that love for the game is a family affair.

“I started playing with my brother and my dad and now I’m playing catch with everyone,” Kaiswatum said.

The young player learned he would make that symbolic first throw last Saturday — and it was a big moment for his entire family.

“He texts me the next morning and says: ‘Grandpa, guess what? I get to go to the Blue Jays’ game,’ and Taron and I are always talking about baseball and it was great news to hear from him,” Keshane said.

Standing Buffalo Dakota Nation is about 75 kilometres northwest of Regina, and word that the community was getting its time in the MLB spotlight got around quick.

“The fact that this young man gets to represent his nation is something that he’s going to take with him for the rest of his life, and at the end of the day, it’s going to bring Standing Buffalo that much closer together,” said Griffith. “He is so proud of his nation and of his rookie league team.”

His grandpa also pointed to the young boy’s wisdom beyond his years, adding: “He says: ‘Well, I’m gonna represent Standing Buffalo and my family, and I’m proud to go.’”

The league is in its second season, and Kaiswatum is the very first Unstoppable Kid to throw the first pitch.

The league doesn’t work on a wins and losses system. There are points given towards community involvement milestones, like if an Elder shows up to a game.

The team with the most points at the end of the season gets to go on a trip to Toronto to see the Blue Jays play and is recognized during the game, according to Griffith.

“It’s a really unique league, and I really hope other provinces across our country can add this program.”