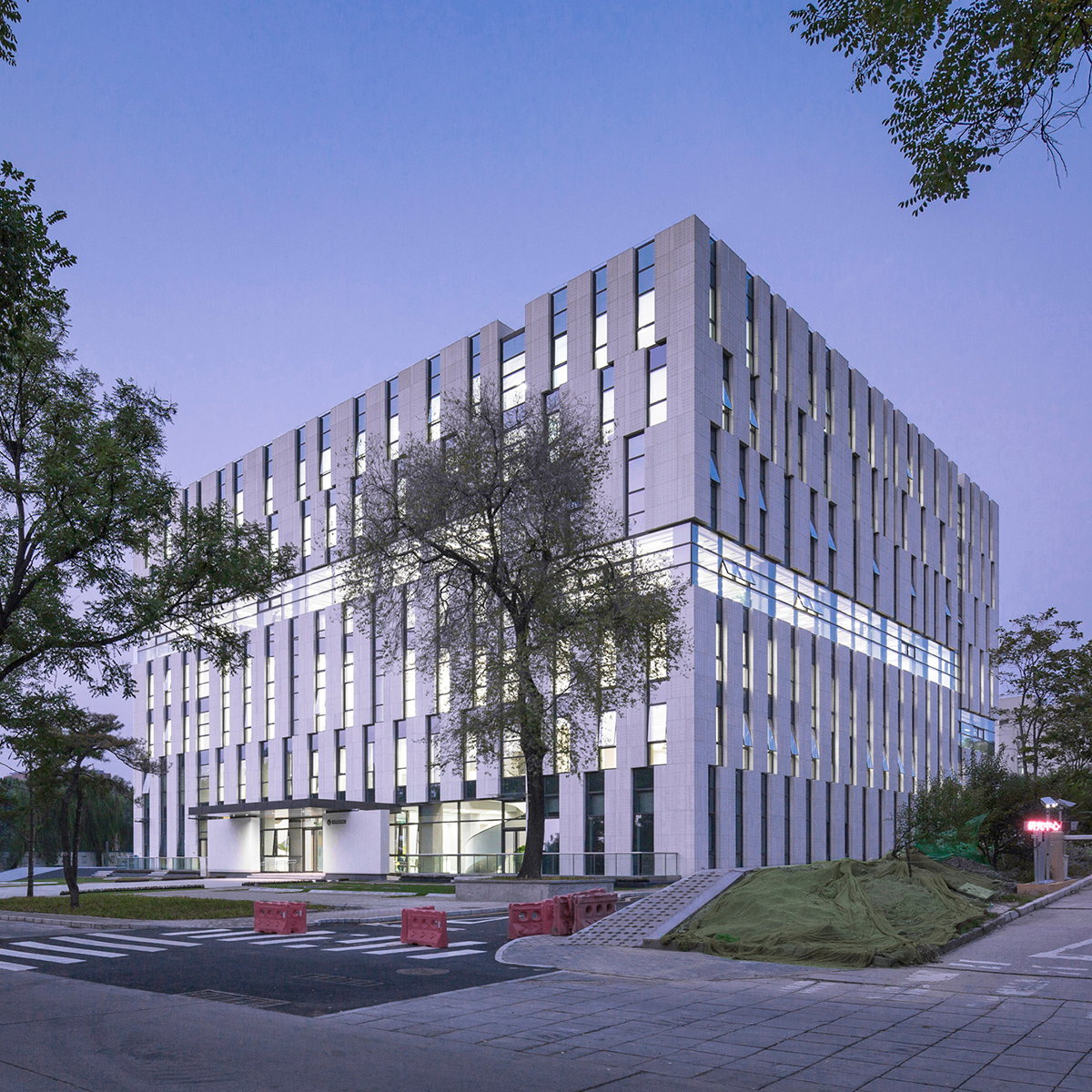 In 2014, Kokaistudios won an international architectural and interior design competition to build the Law Library of Tsinghua University in Beijing. Comprising a trio of functions – research, teaching, and office space – the building recalls both traditional printing blocks, as well as the Chinese capital’s signature hutongs and courtyards. Defined and connected by a series of voids, it is a striking addition to this most prestigious of campuses.

Conceived as one of a group of buildings, it was important that Kokaistudios’ new 20,000 sqm structure complemented the already defined thematic landscape of sunken areas, and both open & closed walkways. With this in mind, “duality” is central to the new library building.

The facility’s functionality is layered vertically, moving from open and public at its lower levels, to private and enclosed up top. Working with the surrounding landscape of carved out patios and precincts, the library’s two entrances are at different levels. The west-facing access point opens onto the ground floor: open and airy thanks to a double-height atrium, it connects to a 450-seat events space, primarily used for moot court. The eastern, basement level entrance leads to facilities including a student center and cafeteria, as well as multimedia classrooms.

Calling for a higher degree of privacy and quiet, the three floors above are occupied by the library itself. Organized in a spiral, its rotational symmetry centers around a central void: a three-story atrium, topped with a skylight for plentiful natural light. Wrapped around this central space are the book stacks themselves; and at the levels’ outer edges, reading and study areas. Connected by a series of ramps and stepped seating areas, light-colored wood lends a calming, soothing effect. Desks themselves are positioned next to generous windows to afford natural light, as well as striking views across the campus. A highly efficient use of space, and creating an instinctive visitor flow around the library, its effect is one of seamlessness and continuity.

Moving higher up the building still, the top three floors are occupied by offices for academic staff, as well as seminar rooms. In stark contrast to the openness of the levels below, the restricted-access area is calm, quiet, and almost cloister-like in its privacy. Continuing the theme of voids, cut-outs, and spaces, the floors’ functions are arranged around a central courtyard, reminiscent of those found in classical Chinese dwellings. At its center point is a skylight, connecting all of these elements and tiers of privacy through light.

The voids and carved-out spaces that define the building’s interior are thematically continued on its exterior. In particular, the continuous and tapered diagonal window of the library’s reading and study areas give transparency to the structure’s middle three stories to intriguing effect. The facade’s stone cladding, meanwhile, appears as vertical strips, reminiscent of classical bamboo scrolls. Connecting to the facility’s purpose – that is, books, order, and law – the overall impression is redolent of a traditional wood print block, or chop, the certified seal used to authorize or sign official paperwork in China.

Appearing as a block puzzle of interconnecting solids and voids, the library also recalls the labyrinth-like hutongs of inner Beijing, and in particular, their traditional courtyards hidden behind walls and doors. Its voids and cut-outs also mark a thematic extension of the sunken patios that characterize the building’s surrounding areas, and in particular, its neighboring buildings.

These elements combine to deliver all necessary functionalities of an academic building of this kind – that is, room for study and exchange; research; as well as quiet and reflection. A landmark architecture for one of China’s most prestigious institutions, Tsinghua University Law Faculty Building continues to not just serve but also inspire both students and scholars alike.