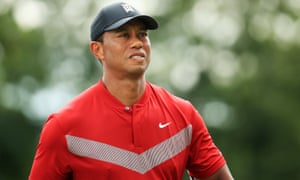 For Woods not to have qualified among the PGA Tour’s leading 30 players for this week’s season finale at East Lake will not prevent glances back to 11 months ago. It was at this Atlanta venue that Woods, memorably mobbed by giddy spectators on the 72nd fairway, delivered his first tournament victory in five years. The seal had been broken, with one of the finest sporting comebacks in sporting history complete as Woods prevailed again, at the Masters in April.

There were warning signs as to what might happen next within a week of Woods winning the Tour Championship, even if we were either unwilling to heed it or comfortable that the excesses of success after years in the doldrums would take a natural toll. Woods was a jaded, diminished figure at the Ryder Cup, with his demeanour in the post-tournament press conference a particular eye-opener. As he celebrated euphorically at Augusta National, everyone bought into a new reality; Woods was back in pursuit of Jack Nicklaus’s record majors haul of 18.

Perhaps Woods’s life is never supposed to follow convention. What is unquestionably true is that the 43-year-old remains as shrouded in mystery as ever. Even those who spend time around the 15-times major champion are left to speculate as to the extent of his physical problems and, after scaling Everest one more time when donning the Green Jacket, professional hunger. By his own admission, and owing to a fused back, Woods can no longer practise or play as much as was once customary. Precisely what he can do with a body that has suffered trauma more akin to a bull rider than a golfer is unclear.

Statistics point to the possibility of Augusta being the exception as opposed to the rule, albeit a pretty decent exception. Joe LaCava, his caddie, pointed out as much as they walked from the final green of the BMW Championship on Sunday, their season prematurely over . “You’ve got the jacket and that’s all that matters,” said LaCava. “Fuck it.” Indeed, Woods could have announced his retirement in the immediate aftermath of Masters glory while being the author of one of the greatest stories ever told. Maybe, just maybe, Augusta was as good as it is ever going to get.

Woods conceded the Masters “took a lot out of me” but related that to his physical state. “I need to get a little bit stronger in certain body parts,” he said at the weekend. He has not explained whether or not the mental exertion, intensified by the presence of his two children, took him to a point whereby little else mattered any more. The scenario after Augusta is pertinent because Woods had offered evidence, including in majors, he could compete and win before then. In the aftermath he entered steep decline.

In a dozen tournaments this year Woods finished within eight shots of the lead only once – at the first major. He missed the cut at the USPGA Championship and the Open – he looked frail during both – before withdrawing from the Northern Trust because of injury. From 17 post-Masters strokeplay rounds, Woods broke 70 only three times. “It is frustrating,” said Woods of missing East Lake. “It is disappointing. But that’s the way it goes. Last year culminated in a pretty special moment for me and it would have been nice to go back there but I’ll be watching the guys on TV.”

Award-winning detective skills are not required to deduce that unwillingness, or in this case inability, to work with intensity away from the course will lead to rust when on it. Woods’s light schedule not only leaves him little margin for error but means shortcomings will be exposed. Heading into next year Woods has somehow to square the circle of being tournament ready from the minimal competitive starts he insists are necessary. It is hard to play infrequently yet play well.

Attention has tentatively turned towards December’s Presidents Cup, where Woods will enter fresh territory by captaining the US team in an event they have become accustomed to dominating. Woods has been circumspect regarding whether he will also take on playing duties against the internationals side; the truth is everyone involved in an event that plays a clear second fiddle to the Ryder Cup will want him to for profile purposes.

By the time that joust at Royal Melbourne swings round Woods may have featured only in a new PGA Tour stop in Japan and at the Hero Challenge, which he hosts in the Bahamas. It is hardly being unkind to suggest we will have learned little more about Woods’s prospects on the back of those events. The new year, inevitably, will bring a raft of fresh questions. Will the real Tiger Woods please stand up? Insert punchline.