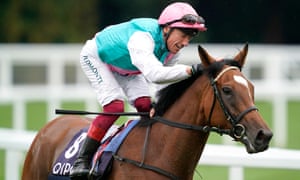 John Gosden is concerned about a potentially tactical race after only four runners were declared for the Yorkshire Oaks on Thursday, expected to be the final race in Britain for his star mare Enable. The five-year-old is long odds-on with bookmakers to land the prize on her way to Paris in October, where she will attempt to become the first horse to win the Prix de l’Arc de Triomphe for a third time.

“The smaller the field, the stranger the race can often be,” said Gosden, who has provided one of Enable’s three rivals in Lah Ti Dar. The other two runners are trained by Aidan O’Brien, notably Magical, supplemented into the race last week at a cost of £30,000. Completing the field is South Sea Pearl, only eighth in a French Group Two race at the weekend.

“Magical was what you might call an unusual late supplement for one of Aidan’s, who are normally in all the races from day one,” Gosden said. “And then they’ve popped in a filly that just happens to have run a mile and a half round Deauville on Sunday. She’s obviously on a travel bonus scheme.”

To a suggestion that South Sea Pearl may be a pacemaker, Gosden replied: “I don’t know if she’s fast enough to do that. She didn’t look fast enough to me the other day, so I’m not quite sure what she’s doing there.”

Enable can make the running if required and did so when winning the Yorkshire Oaks two years ago but Gosden would not commit to her doing so again. “I’ve got to discuss it with Frankie [Dettori] and leave all the options open. They’re very trappy, these small-field races. You can have a plan but you usually go pretty quickly to plan B, which is a blank canvas.

“We’ve been very happy with her indeed. And actually, funnily enough, with Lah Ti Dar. She’s run twice at York and won there both times. The Lloyd Webbers are very keen, they’ve planned it all year, so she’s running.

“I’ve never been a great one for running good fillies against each other but once you get into the late summer and autumn, the options are not multiple if you want to operate at Group One level.”

The presence of Enable and Magical, the two highest-rated females in Europe, proved enough to scare away the other possible runners, Sir Michael Stoute taking out Sun Maiden, while Ralph Beckett withdrew Manuela De Vega. Gosden’s Oaks winner, Anapurna, will also go elsewhere, possibly to the Vermeille next month.

Gosden runs the second-favourite in Wednesday’s big race, the Juddmonte International, in King Of Comedy, last seen running on well into second over a shorter distance at Royal Ascot. “You can find easier races than this, taking on Crystal Ocean, but he’s a talented young horse and he deserves the opportunity. He was still quite immature at Ascot. He’s come on a lot since the race. I’ve been very happy with his work, I think he’s more professional now.”

On Friday, the trainer runs Stradivarius in the Lonsdale, in which the chestnut could trigger a £1m bonus from Weatherbys Hamilton for the second year running if he wins.

“I’m just sitting here looking at the field, it’s pretty hot,” Gosden said. “There’s some very smart horses. He’s got the penalty to deal with, he’s giving 3lb to the other older horses and he’s giving a bundle of weight to the likes of South Pacific, so the weights could well be really tough against him. He’s going great, he’s in good form at home.” 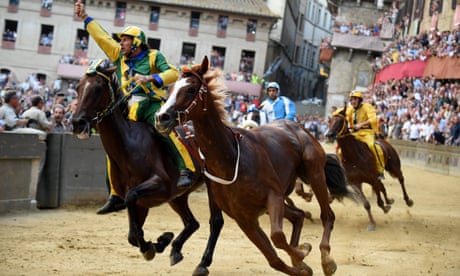 The Gosden/Dettori bandwagon looks set to rumble right through York this week, starting with King Of Comedy (3.35) in the Juddmonte International. We could see significant improvement from this one, who has been tucked away for the last couple of months, while his stablemates have been sweeping up Group Ones for fun.

He seemed the one to take out of the St James’s Palace Stakes, when a storming run up the straight took him into second place and he would have won with just another few yards. That was his first try above Listed level and he hung away from the whip, so there is every chance of another step forward, with his trainer reporting that he has grown up a bit.

urns to his saddle. He is preferred to Crystal Ocean, who was helped by the rain (and Dettori) when he won the Prince of Wales but probably meets a drier surface here and might just lack the selection’s pace.

Similar concerns are held for Japan. Regal Reality is an each-way option at 33-1, if he can be forgiven his soft-ground flop here last time.

1.55 York Shergar Cup form is not usually the first thing one looks for at one of the year’s biggest meetings but Final Venture ran a big race when pipped at the Ascot jamboree recently. He was beaten only a neck in this contest last year and the in-form Oisin Murphy can be relied on to make the most of his chance once more. Two years ago, he was in the Nunthorpe but he has come down to a rating he can beat when everything falls right.

2.25 York Charlie Hills has won the Acomb twice in the last four years and it is interesting that he comes straight here with Persuasion, who made such a good debut when winning at Glorious Goodwood. There is some precocity in his family, so it might be rash to expect much improvement, but that effort already makes him one of the three best-rated entries here and the other two have had many more chances. He also overcame some trouble in running that day.

3.00 York Constantinople has plenty of ability but he has to be viewed with some suspicion after consecutive narrow defeats. Logician has a few pounds to find to take a Great Voltigeur but he is the unexposed one and is certainly going the right way. Dettori rides him for only the second time.