Adhesives have been a mind boggle for materials scientists for as long as they’ve been around. Though adhesives exist that can stick well, anyone who has ever tried to remove the adhesive once its fully stuck on knows that it can be a process that’s difficult or even painful—as in the case of something like a Band-Aid.

This ability to reverse adhesion—from super-sticky to something that comes off smoothly—is something scientists have sought to solve for years. Now researchers at the University of Pennsylvania believe they have solved the puzzle.

“In our daily life, we use adhesives in many occasions,” Yang told Design News. “We have a choice of using glue, which is liquid and permanent after cure and could be messy to apply, or tape, which is neater, flat, but less strong in adhesion strength. While glue offers stronger adhesion, once applied, if we made a mistake or it’s not perfectly aligned, we cannot take the glued object apart and redo it.”

Yang and her team had been working on solving this problem for some time, but mainly used geckos as their natural inspiration for material biomimicry. However, they could only get so far with this work, she said.

“Geckos can put one hand down and then release it, so the gecko’s adhesion is reversible, but it’s very low adhesion,” Yang told us. “A gecko is 50 grams, and a human is at least 50 kilograms. If you want to hold a human on a wall, it’s not possible using the same adhesive.”

It took work on another project—involving a hydrogel comprised of a polymer called polyhydroxyethylmethacrylate (PHEMA)—to achieve the breakthrough the team needed to develop the snail slime-like material.

One of the researchers, Gaoxiang Wu, noticed that PHEMA—which is rubbery when wet but rigid when dry—also had strong adhesive properties. When wet, the material conforms and sticks to both smooth surfaces as well as those with ridges and grooves, the team noticed.

However, while this quality is important to making a good adhesive, it’s not the only requirement. PHEMA’s behavior when it dries—becoming rigid but without shrinking—is what was the key to researchers’ interest in it. This behavior causes the material, when dry, to harden into the cavities, fastening itself securely to the surface, researchers said.

“When materials dry, they usually shrink,” Yang said in a press statement. “If it shrinks from the surface, it no longer wants to conform to the microcavities and it’ll pop out.”

The PHEMA adhesive, on the other hand, doesn’t pop it; instead it stays conformal and remembers the shape even when it’s rigid and dry, she said.

The slime a snail uses to stick to surfaces—called epiphragm—acts similarly. When wet, it conforms to a surface and hardens to hold the snail in place. When the air becomes more humid, the epiphragm softens and lets the creature move freely again.

The team tested the PHEMA hydrogel to see if its wet flexibility and dry adhesion also would reverse, as well as to see how much weight it could hold. What they found was that it acted quite similarly to snail epiphragm as well as 89 times stronger than the gecko adhesion that had inspired other materials.

“When it’s conformal and rigid, it’s like super glue,” Yang said in a statement. “You can’t pull it off. But, magically, you can rewet it, and it slips off effortlessly.”

It also could maintain adhesion even when one of the researchers, Jason Chirstopher Jolly, suspended himself from a harness held up only by a patch of the adhesive the size of a postage stamp, researchers said. The team published a paper on their work in the journal Proceedings of the National Academy of Science.

Due to its reverse adhesion and strength, researchers believe the material has great potential for various applications, including household products, robotics systems, and industrial assembly. 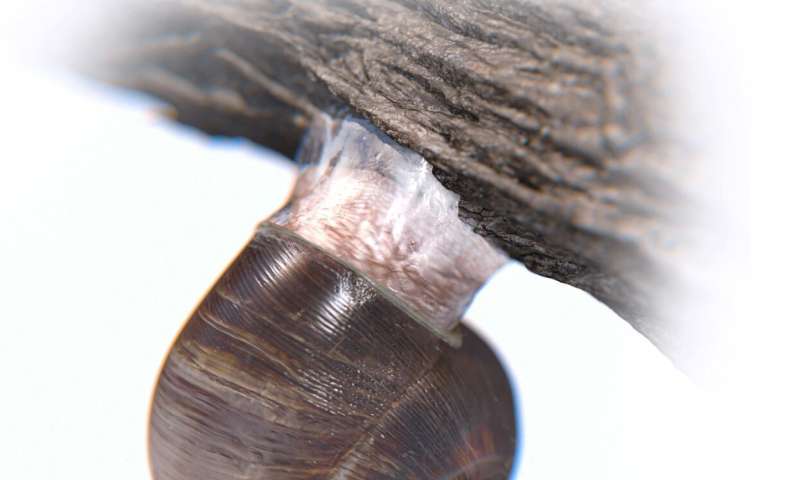 However, the material also has its limitations, as its reversibility is controlled by water, Yang said. This means it may not be suitable for a number of applications—such as car assembly and other industrial uses—in which reverse adhesion would be helpful but water activation would not, she said.

The team aims to continue its work to engineer similarly performing adhesives without this limitation as well as ones that can respond to different activation cues, Yang said.

“We hope to find other materials that can possess similar properties like PHEMA but can be activated by heat, light, electric, or a magnetic field to switch the mechanical properties, thus, adhesion,” she told us.